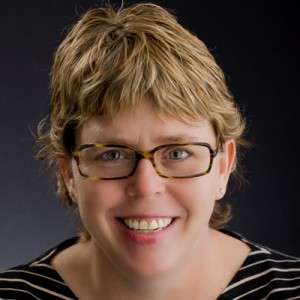 Kate Beck is not most people.

Kate Beck, Agent of Change and HomeStreet Bank mortgage consultant, is a mother of two: one, an eight-year-old son; the other, a four-year-old daughter.

“I didn’t even know I wanted kids until I moved to Seattle when I was about 37,” she will tell you, “and then I really wanted kids. I wanted two. By moving to the liberal West Coast, I was able to open up the opportunity.”

Kate loves being a mother, and she loves her job, too. Especially working with first-time homebuyers.

“They’re so sweet,” Kate says, “and you can see their gratitude and their joy in being able to buy a house that they didn’t know that they could get. It’s very rewarding to be able to take somebody from having maybe less than perfect credit all the way to buying a house.”

In addition to her work as a mortgage consultant, Kate served as the Washington chapter leader for Moms Demand Action for Gun Sense and as a long-time member of the GSBA board. Recently, though, Kate’s volunteerism has turned to the issue of homelessness. For her 50th birthday, she asked people to donate to homeless women’s feminine hygiene needs. Her fundraiser has already raised half of her $5,000 goal. And now Kate has joined the ranks of Agents of Change. “I’m hoping through all of this that I can get the kids more active,” Kate says, “and have them grow up giving back.”

“During the collapse, I wrote out my ten goals, and one of them was to make enough money that I can support the companies and nonprofits that I believe in. I believe it’s so important to put our money where our beliefs are, and I love teaching this to my kids.”

“Having a safe place to sleep at night is so pivotal to everything. I have small children, and it’s so important for schools, for learning, for education. Having a safe haven can be life and death. Ultimately, we’re animals, and if we don’t have a den to rest, it’s really detrimental.”

“I give at least 10% of my income to nonprofits, and I love doing it. It makes me so happy to give money away and see it put to good use–I think that’s part of just being a citizen.“

“What I love about Mary’s is how they respect people’s dignity, and how folks can come there and have a place to have a home and get a shower, and to be treated well, which is so important.”

“Especially through the financial collapse of 2008 and 2009, I think we all learned the importance of saving and having a safety net—even people with higher education and incomes. I think we all learned that we’re all a paycheck or two away from destitution. When the stock market’s crashing and your housing’s crashing, you lose your job, and what you thought was your safety net goes away, it made us all realize how vulnerable we are. In our business, we have really great years and we have not-so-great years, and in the really good years, I want to give back as much as possible and help create that safety net for other people.”